The nights are fair drawing in. I look around and see tired faces rushing out of the wind and rain and attempting to get the endless list of jobs completed before the festive period takes hold. We are all exhausted and cold and our bodies are yearning for hibernation. Despite this, it’s a tradition in our family to mark the start of the season with a wee bit of activism. We are looking forward to joining organisations across Stirlingshire and beyond to ‘Reclaim The Night’. The herstory of these events is not entirely clear, although many believe they were started in Leeds in the 70s in response to circumstances involving the Yorkshire Ripper. Either way, we all know people who don’t feel safe on the streets and it can be incredibly empowering to stand alongside women, children and their allies to take some space back. My kids love it. The fairy lights and chanting help… 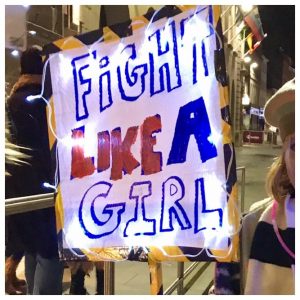 Accounts of the period around the Yorkshire Ripper have faded, so why are the marches still growing in popularity? Undoubtedly the #MeToo movement has consolidated these previously hidden forms of gender-based violence. This raising of the public consciousness of attacks on women propelled further in to the light with recent hard won victories in relation to more equal access to abortion for British women and the erosion of access across the pond. Now is not the time to stay silent. And so we march. Me, my partner, our five and three-year-old daughters and our friends. We will reclaim the night, if only for tonight, because we matter, and we should feel safe.

Under Article 39 of the United Nations Convention on the Rights of the Child there is a responsibility for signatories to meet the rehabilitation needs of child victims of sexual abuse. It makes governments accountable for ‘providing children who have been neglected, abused or exploited special help to physically and psychologically recover and reintegrate into society. Particular attention should be paid to restoring the health, self-respect and dignity of the child’. In 2008 and again in 2016 the UN Committee noted shortcomings in provision under Article 39 and asked that the UK and the devolved governments take action to address these gaps by providing comprehensive access to services “for recovery, counselling and other forms of reintegration in all parts of the country” (Together Scotland, 2008; 2016). So why are we still waiting? Very few local authorities in Scotland have services which support children and young people who have experienced sexual violence. More than half of the councils identified within a survey of seventeen local authorities in the West Coast of Scotland lacked any specialist service for children of primary school age. Fifteen of the seventeen councils had no service for children aged under five years (Galloway et. Al., 2017). The vast majority of these services operate a waiting lists, with waiting times of up to a year.

A 2017 strategic review of forensic medical services by the HM Inspectorate of Constabulary, emphasised that the current Memorandum of Understanding between NHS Scotland and Police Scotland for the provision of forensic medical services and healthcare should be reviewed urgently. They also highlighted the need to provide greater clarity around the statutory responsibility for delivering these services. Scotland appeared to fall behind the rest of the UK in providing healthcare, advocacy and ongoing therapeutic services for all survivors of sexual abuse. This simply isn’t good enough. As a Social Worker I have battled to keep these examinations as child friendly as possible and have witnessed amazing resilience and compassion from children and their families as well as practitioners forced in to circumstances that they also know are not good enough. Things need to change though, and fast. Other Countries do this better and in order to ensure Scotland really is the ‘best place to grow up in’, reform is needed. Personally I am very interested in the ‘Barnhaus’ model, where services are all under one roof and delivered in a child-centred way. However I would happily consider alternatives providing they explicitly meet the needs of children and their families whilst ensuring dignity, safety and recovery. 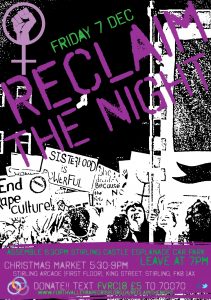 We at CWP will be joining the Stirling march. Information here: Stirling

Other Local Reclaim the Night Marches:

This site uses Akismet to reduce spam. Learn how your comment data is processed.